Habitat NYC’s Housing Preservation Program provides buildings like 789 MacDonough with zero- or low-cost painting, repairs, financial assistance and Board training, and more. These services provide a lifeline for homeowners in these buildings, allowing them to remain in their homes, in their neighborhoods for generations.

As told by Corinne Douglas, Board Treasurer and Lisa Lanier, Board President 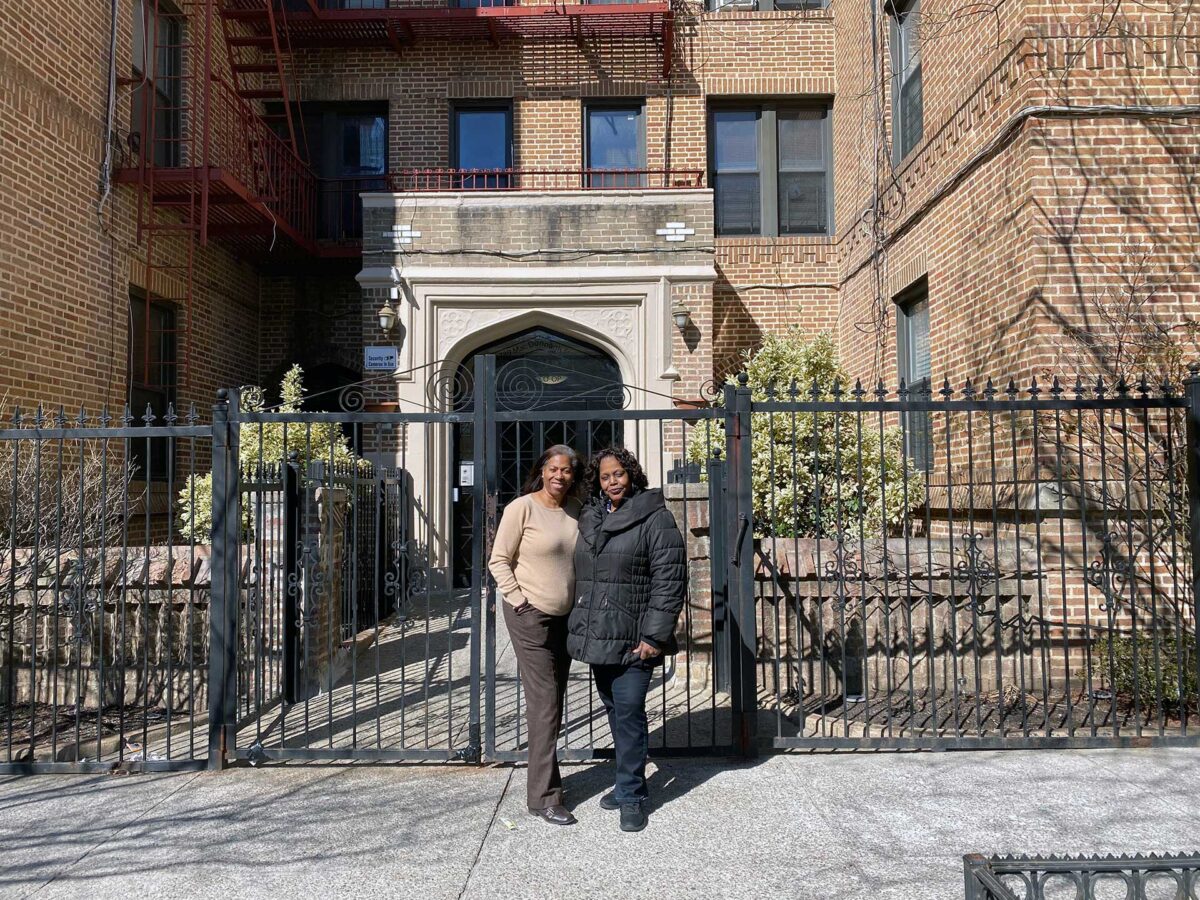 The families who call 789 MacDonough Street in Bed-Stuy, Brooklyn home, have been through some tough times. The building, a charming brick, pre-war walk-up with trees shading the sidewalk, was built in 1930 as a rental building. Lisa L.’s family moved into the building in 1969, when she was a child. But in the coming years, a string of bad landlords would cause the building to fall into decline.

“It was a beautiful, gorgeous building. Somewhere in the mid-70’s or late-70’s, it started turning for the worse,” Lisa said. “No heat, no hot water. When your water freezes in your toilet bowl–that’s how cold it was. Winters were really rough. The entrance door was hanging off the hinges, the only security was Tenant Patrol. It was just really bad, because we had landlords that would come purchase and then not keep up the building.”

The residents – 41 families in all – had had enough. To protest the unlivable conditions, residents protested and marched for their rights in Albany and even staged a rent strike. Not that the landlord cared. In 1989, the City of New York stepped in, and offered the residents the opportunity to purchase their own building, for $250 per unit. “Each person would purchase their unit for $250, and that would buy the building. So everybody paid the money, purchased the building, and so that’s how we owned the building,” said Lisa.

“$250 in those days was the rent,” she added. “So, basically, for your month’s rent, you ended up owing your own apartment. It was a win-win.”

Once they became a co-op and owned their own building, Corrine said, “Everything was different. We needed to form an organized working board and become knowledgeable about what makes it all work and keeps it afloat. Those were a rocky first couple of years, from ‘89 to ’91, as we navigated the learning curve to successfully manage a 41-unit building. Building management quickly became a full-time job instead of a side hobby. It was a struggle to keep this building operating and in the black, and now, 30 years later, we still own it, regardless of the previous ups and downs.”

And the building has certainly had ups and downs. Some of the downs?

Unpaid sewer bills, a flooded basement from 90-year-old pipes. Working with one of Habitat NYC’s partners, the Urban Homesteading Assistance Board (UHAB) to narrowly avoid foreclosure. A former Board president who embezzled more than $130,000. “But you just have to manage it as it comes,” said Corinne. “You have no choice; because it’s yours—you can’t just put it down and say, ‘Well, somebody else will do it.’ At the end of the day, as owners, the only someone else is you.”

Recently, the Board decided that the interior of the building needed a new coat of paint. “The first time we painted, the painting company charged us multiple thousands of dollars to paint the building,” Corinne told us. Then they found the Habitat NYC Housing Preservation Program, which, among other services, offers income-restricted HDFCs affordable repair and painting services. 789 MacDonough hired Habitat NYC as painters, to fix some crumbling masonry by the windows and on the roof and to work on the interior floors and ceiling. 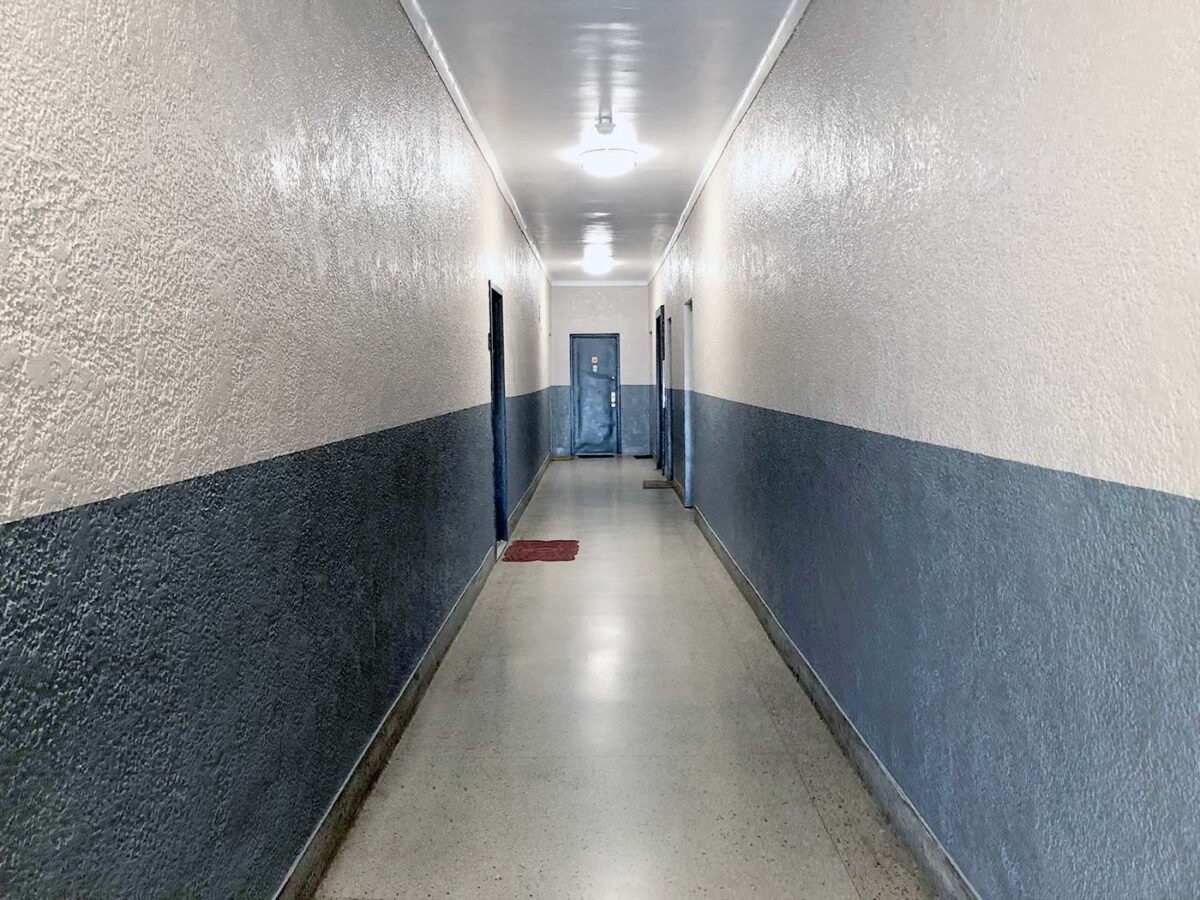 “We chose Habitat because of their affordability and dedication to the community,” Corinne said. “Whatever additional work we needed, they were able to provide those services, with industry comparable quality work, and they did it right away.”

One of the ways Habitat NYC can keep our preservation services affordable is through the strategic use of volunteers, who come into these buildings and provide a service to their neighbors. “One week, there was a whole family that volunteered; they told me they do this annually as a project. They came in, painted, and brought food in for all the volunteers that day. It was inspiring for us in the building to see Habitat’s unity. And it wasn’t just this family; all who came shared a genuine interest in providing this work as a service to the community and wanting to give back,” said Corinne. Residents and volunteers got to know each other – saying ‘hi’ in passing in the halls, like neighbors. “I think it was an exceptionally inclusive and integral experience, one that we would not have had if we had professional painters coming in,” Corinne said.

The repairs and the fresh paint and newly shiny floors give a sense of pride to the families who call 789 MacDonough home. “Before the work, I would give my incoming guests a disclaimer,” said Corinne jokingly. “But when everything is new and freshly painted, everyone is proud to bring their guests through and showcase the lobby and building interior because of the first-rate product given to us by Habitat.”

For New Yorkers like Lisa, who has lived nearly her whole life in one building, who has lived through so many difficulties, services like those our Housing Preservation Program provides can be a lifeline – allowing them to remain in their homes, in their neighborhoods. Corinne says it best:

“To live in this building during the ’90s, you also needed the wherewithal and the strength to stay in the neighborhood. At the time, our community was drug and crime-infested. One Saturday, after church, my husband, mom, and I were sitting in the car. We had just pulled up, and as we sat and discussed the service, we heard ‘Boom, boom, boom!’ We all scrambled for cover in the car. I mean, it was like living at the OK Corral: at any given moment, shots would ring out from the corners, and people would scream and scatter. And while that was our reality, we chose to stay. We held up and supported this building and the surrounding community, through the best and worst of times, and we’re still here to tell that story of endurance, perseverance, and most importantly, of success.”